Enrico Bonavera is the Arlequin of the Piccolo Teatro di Milano – Teatro d’Europa.

He was an apprentice of Ferruccio Soleri and with an education background in Experimental theatre with Teatro di Ricerca (E.Barba and J.Grotowski), has been performing on stage for more than three decades.

From 1987 to 1990 and again from 2000 until present, he has been Brighella and Arlecchino  in the great Servitore di due padroni directed by Giorgio Strehler at the Piccolo Teatro di Milano.  With that Materpiece hi travelled in all the world :  Europe, Russia, Usa, Canada, South America (Chile, Brazil, Ecuador, Argentina) North Africa, (Algeria, Egypt) and in Asia (Japan, China, Khazakistan, Georgia). 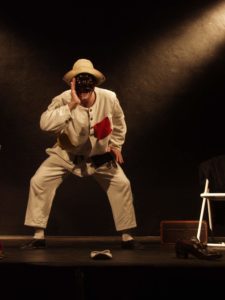 As a teacher, he has been collaborating since 1990 with the Scuola del Teatro Stabile di Genova.   He has taught at ENSATT in Lyon, at the European Summer School in S. Miniato of Pisa, at  the Corsi di Formazione of the Teatro del Veneto,  and of de Centro Maschere in Abano Terme directed by D.Sartori, and taught at the Corso di Formazione di Mimi d’opea at the Teatro dell’ Opera di Genova. 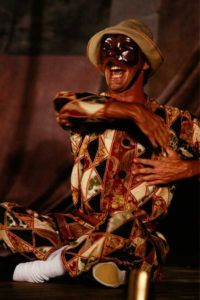 He collaborates as trainer at the Accademia di Commedia dell’ Arte of Piccolo Teatro di Milano directed by F. Soleri, at the Shapkin Theatre School in Moscow.

In 1996 he was awarded as best actor in supporting role at Borgio Verezzi festival for his Arlecchino in C.Goldoni “I due gemelli veneziani”,

In 2007 he was awarded the ‘ Golden Arlequin” in Mantova, European city of Theatre, award that was previolsy given to Marcel Marceau, Dario Fo, Ferruccio Soleri, Carolyn Carlson. 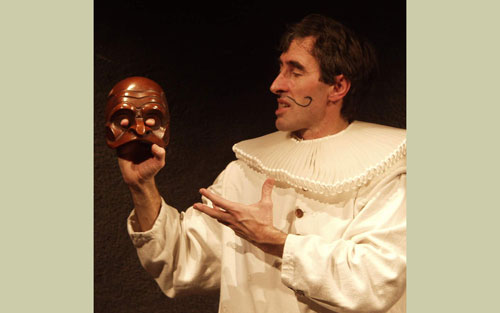